Official opening of the Motor Show and Motopassion

Official opening of the Motor Show and Motopassion 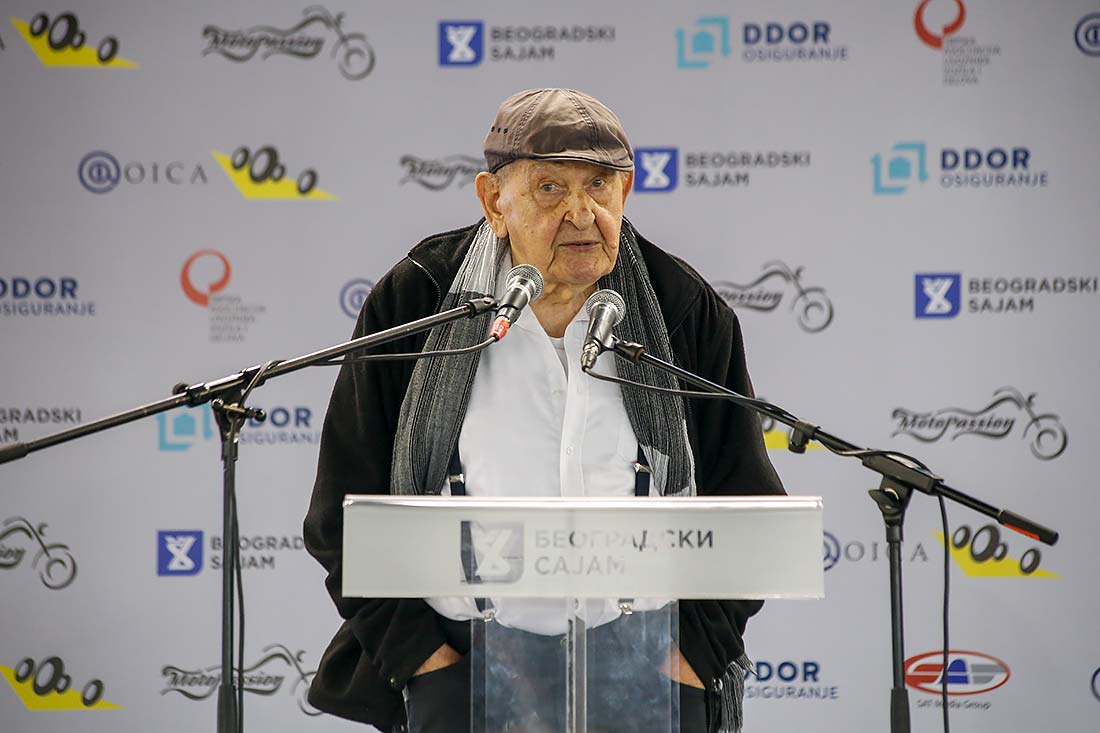 The International Motor Show 2019 and the Motopassion International Motorcycle, Scooter, Quads and Equipment Show were officially opened at the end of the “Press Day”, the day before the official launching of the fair in a relaxed atmosphere of Hall 1 which is expected to be filled to the brim in only fifteen hours from now.

A well-known Serbian theater, television and film actor Mr. Vlasta Velisavljevic, most certainly contributed to such atmosphere and now at the age of 92 is one of the two oldest holders of a proper driver’s license who came to this grand opening by his own car.

In an informal and quite humorous recollection of his “automobile life”, he reminded the audience that he personally does not own any kind of an opulent car, nor does he lead such life, for which reason the police sometimes look through his fingers. He recalled the day when he attended a well-known Real Gymnasium by Kalemegdan fortress, when “Grand Prix” was run around Kalemegdan, the famous race of former “Formula 1″. ” A Serb took part at the race competing for “Grand Prix” driving a great car which exceeded everyone’s expectations. The most popular world stars also came – Italian Nuvolari, for whom we had all cheered, and the legendary von Brauchitsch. Both drove 500 horse power vehicles. The track covered 50 laps, and all this lasted and lasted… And all that time, Nuvolari led the race, and then, at the end of the race, von Brauchitsch overtook him around that dangerous curve at the French Embassy, ​​and – won. The Serb was 16 or 17 laps behind. I remember this person gladly, but for some other reason. Namely, after the war and reconstruction, Belgrade got the first trolleybus, the famous “ansaldo”. I approached the driver and instantly it hit me that I know him – that was exactly the same man who competed for “grand prix”. I kindly addressed him: Sir, is this true that you are driving a trolleybus now, you who once drove “Formula 1”, after which he replied: Don’t, please! I remember that man well and without further ado maybe the best thing to say is: “The Motor Show is now officially opened!”.

Mr. Igor Sevo, the President of the Assembly of the Association of Road Vehicle Manufacturers of Serbia, also addressed the visitors, guests and exhibitors, and reminded us all that this is “an association that brings together all manufacturers of road vehicles, equipment and parts, and has been doing so ever since 1947. “We are one of the 38 national associations that is a member of OICA, an international association of car manufacturers headquartered in Paris, which celebrates its 100th anniversary this year, and we have been its member since 1956. As a member of OICA we are the license holders of the International Belgrade Motor Show and therefore I would like to take this opportunity to thank our partners from Belgrade Fair, with whom we have been setting standards for many years on our market, for which reason this event is perhaps the most famous manifestation in our country. Therefore, I would like to repeat the words of Mr. Charles Sincerie, the President of OICA, who visited Belgrade in 2009 and then said that the automotive industry should always be innovative, should shape the future, design nice cars, should be affordable, that cars should always be ecologically friendly and safe, and that they should meet or exceed customer expectations at all times.”

Mr. Sevo expressed hope that in the space of next 10 days all visitors will be able to enjoy the offers, everything car manufacturers and exhibitors prepared, knowing that this fair comes only a few days after the Geneva Motor Show. “Here, we will see a lot of the world’s premieres and a lot of interesting things, exceptionally good offers, thereby I use this opportunity to wish all auto exhibitors a successful 10 commercial days,” he said. 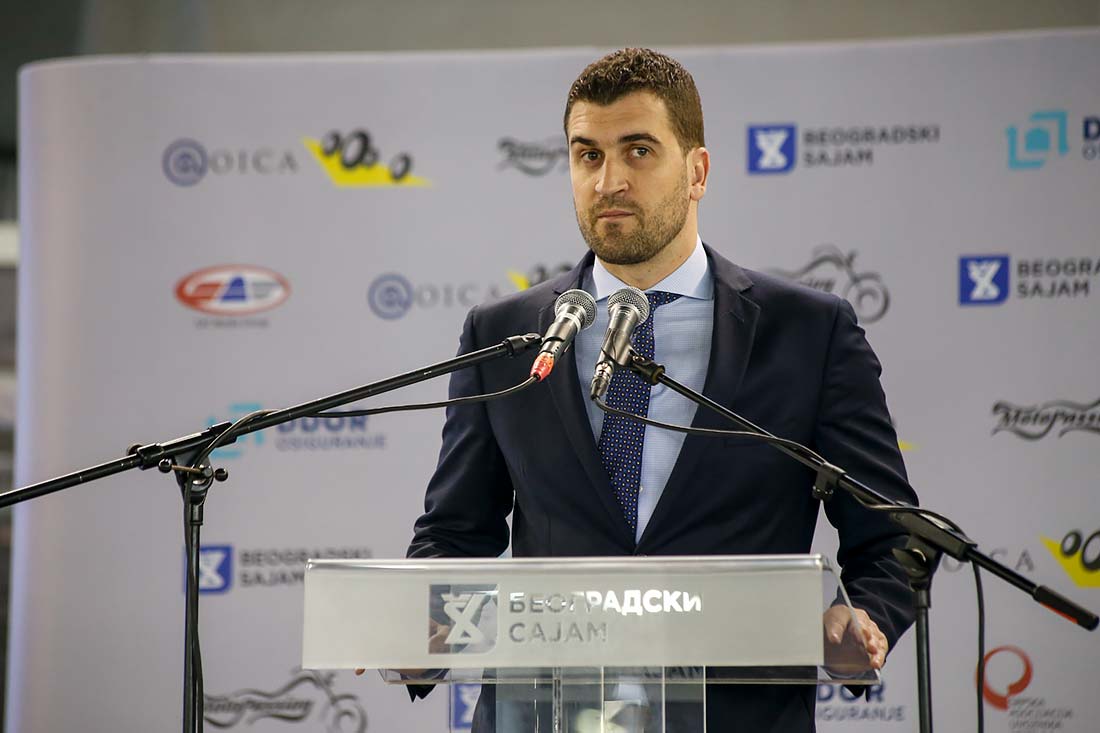 Furthermore, Dr Giorgio Marchegiani, the president of the Executive Board of DDOR Novi Sad, general sponsor of the Motor Show, also conveyed a powerful message.

He reminded that DDOR Insurance is the general sponsor of this event for the seventh time in a row since around two thirds of their business consists of motor vehicle insurance. He said that, as a company, they are proud of initiatives that encourage both safe and humane behavior of traffic participants. “The slogan of this year’s performance is” Heroes on the Road”, and it is an action by which we want to owe respect to drivers who in serious accidents come to help those who suffered serious injuries on the road,” he added.

“DDOR is one of the leading investors in Serbia when it comes to safety of road traffic users. Thanks to our financial support, the Naval Academy has organized thousands of safe driving training sessions, and our joint action entitled “Life for Young Drivers” has remarkable results. Moreover, we take part in education projects on traffic safety through education system and local self-government. At this year’s Motor Show, DDOR has prepared special initiatives and fair offers – we do not sell vehicles, we sell insurance! These are discounts on casco insurance, as well as special training sessions at Navak, an interesting simulator, gift points on the Supercard, gift vouchers and many other surprises “Mr. Marchegiani said. 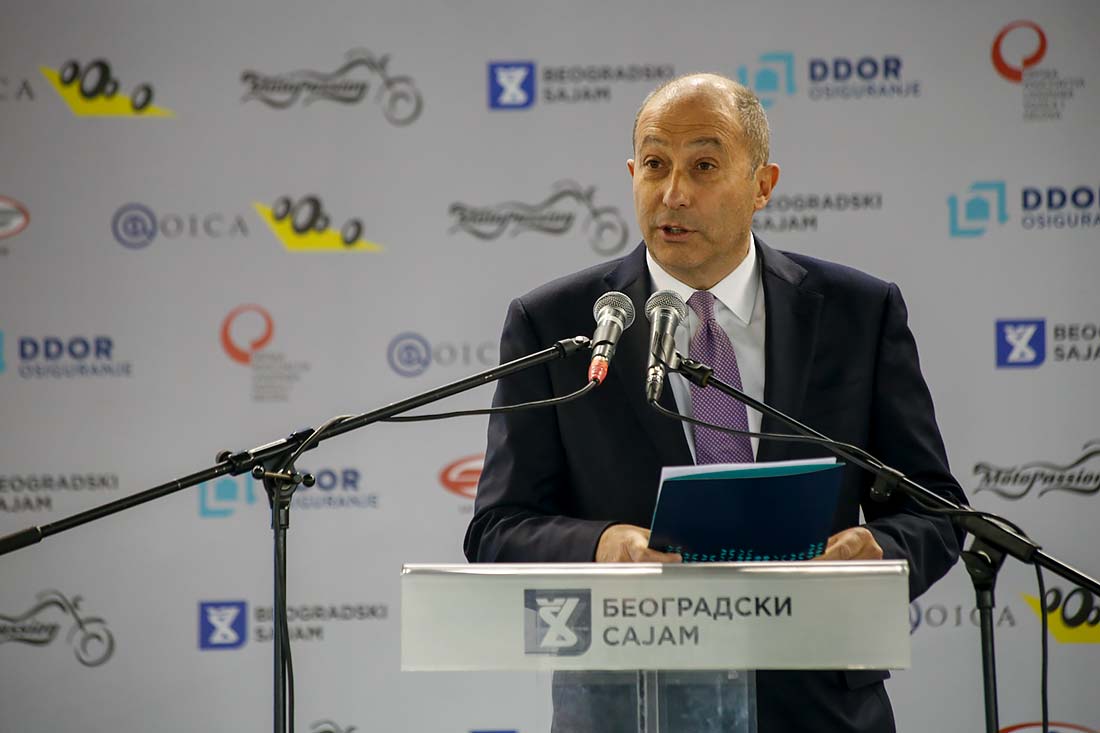 The Belgrade International Motor Show is the most representative, most exclusive and oldest regional event of the automotive industry, and together with Motopassion, the International Motorcycle, Quad, Scooter and Equipment Show it represents a unique fair event and certainly the most significant and most important event in the automotive and motor industry sector in this part Europe.

The visitors are welcomed by more than 400 exhibitors from around thirty countries. The Motor Show will represent 35 automotive brands and 11 brands of light commercial vehicles under the slogan “In the Rear Mirror”. Of that number, 26 brands has announced as many as 48 premieres, and 15 brands 32 novelties or redesigns. “Motopassion” has attracted 36 brands, and out of that number 23 brands have registered as many as 50 premiere performances in the motorcycle, quad, scooter or electric bicycle sector.

As a rule, the Motor Show is held immediately after the elite Geneva Motor Show. This fact gives it a special charm, but also a “responsibility” regarding the “inheritance” of top exclusivity and novelties. Visitors, but also professional public is most drawn to the most attractive premium segment. Premium brands will be represented by Rolls Royce, Mercedes, Ferrari, BMW, Audi, Porsche, Jaguar… with their current offer.

The list of the most prominent and most desirable fair participants includes financial institutions and insurance companies, professional organizations, clubs, associations and specialized media, which should either facilitate or resolve any dilemma faced by the buyer regarding the choice of a vehicle. This especially refers to banks, leasing and insurance companies, but also to financing sectors in automototive companies, sellers and distributors who are preparing favorable fair financial structures so that the buyer can receive the most favorable terms relative to charging, benefits regarding additional vehicle equipment, extended warranty period and repair service delivery conditions.

Everything the Motor Show fails to say through its wide range of passenger cars and motorcycles from the world’s leading manufacturers, exhibitions of accompanying industries, parts and equipment, or hot promotions relative to world innovations and exclusivity, will be offered in an extremely content-based accompanying professional program that boasts informative, educational and entertainment contents, competitive activities, lap runs and other (un) expected pleasures.

A special fair present to devoted visitors is a Family Day, to be hosted on Thursday, 28 March, whereby family visits to car and motorcycle fairs will be enabled at the privileged ticket price for the whole family

INDIVIDUAL TICKET PRICE totals RSD 400.00, group ticket RSD 300.00, group ticket for pupils and students RSD 200.00. (A group visit means more than 20 people/students.) A list of people with full names and surnames, certified by the seal of the company or school and the signature of an authorized person, is required for the purchase of group tickets. Tickets for Family Day total RSD 800.00 (the ticket is valid for children under the age of 16 accompanied by parents). Parking at the fair totals RSD 150.00 an hour.