Exhibition in SANU dedicated to the Belgrade Fair: A Global phenomenon for all time

Exhibition in SANU dedicated to the Belgrade Fair: A Global phenomenon for all time

“Beogradski sajam: Inovativnost tehnologije, arhitekture i culture”, is the name of the extraordinary exhibition open at the Gallery of science and technology of the Serbia Academy of Science and Art on Monday, the 8th of November. The exhibition was realized by the Association “Collective of Architects” and the company “the Belgrade Fair”.

With the extraordinary feeling for the historical, social, international, architectural-construction dimension phenomenon of the complex and institution of the Belgrade Fair, the authors of the exhibition made sure to present to the visitors the history of the Fair from its beginnings in 1937 to this day, highlighting its “second beginning”, at the current location, in 1957, which is the theme of the exhibition. The unbelievable technological, architectural and cultural significance and influence on both the local and global level have secured the Belgrade Fair a halo of architectural exceptionality and value which traced its future economic, social and aesthetic meaning.

Simultaneously with historical reminiscence and chronologic accents in the emerging of the fair complex of today, the exhibition shows also the work of the Institute for material inspection – technological and science-research center which has significantly influenced the way of construction and technological innovations of the second half of the 20th century, thanks to which the Fair in today’s architectural and construction form was possible. Special attention of the visitors was attracted by the exhibited innovative IMS elements for the prepressing of reinforced concrete, which was the base for the then fair, architectural-construction revolution.

The component of the exhibition is the archival material dedicated to the creative opus of Branko Zezelj, Milorad Pantovic and Milan Krstic, whose top domain of expertise and science was precisely the complex of the Belgrade Fair. The exhibition was refined with numerous documents and authentic film material with presentations and explanations of the construction procedures, especially from the word of the engineer of Branko Zezelj regarding the construction of the representative Hall 1.

The famous Hall 1, built by Branko Zezelj’s construction system, was a universal hall with the then world record dome range made from prestressed concrete, 109 meters. Also halls 2 and 3 represented unbelievable solutions using reinforced concrete shells, therefore the thickness of the roof structure could be calculated at only 9 cm in the range of 48 m. In that segment unbelievable and revolutionary solutions were brought by Milan Krstic.

The exhibition setup also includes 3D models of those revolutionary solutions, which greatly enhances the impression of the visitors regarding the historical-architectural “mission” of the Belgrade Fair. 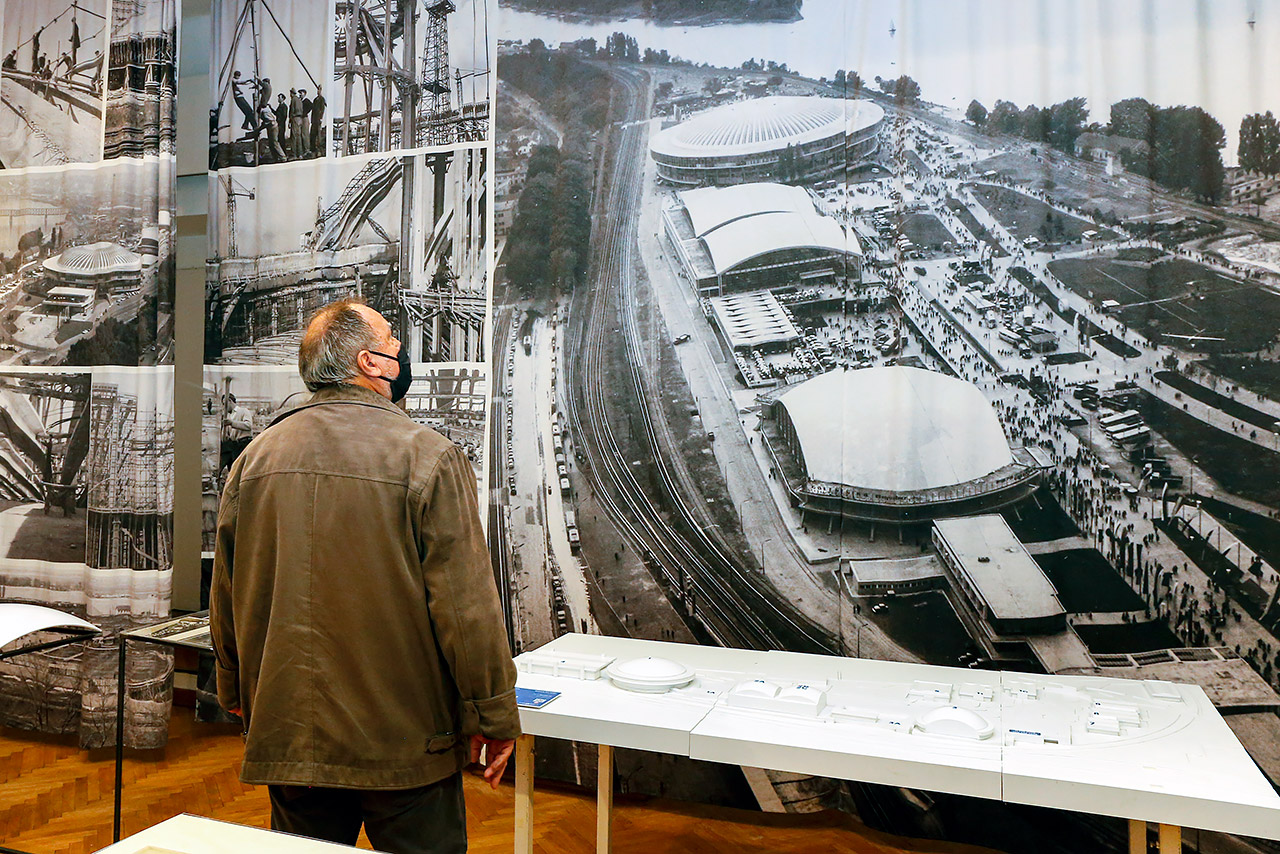 The begging of the new history of the Belgrade Fair, at its current location, was marked by a specialized commission formed in 1952 with a mission to test the possibilities of work renewal of the Belgrade Fair. The following year already, from three possible location the decision was made for the space where the Belgrade Fair is located today, the decision was made regarding the renewal of the Fair, the company “the Belgrade Fair in construction” was formed and a public anonymous competition was announced to develop a conceptual plan for the construction of the Fair, on which, in 1954, the project of architects Milorad Panotvic and Vladeta Maksimovic and the construction-consultant engineer Branko Zezelj was declared best. (Because of the specific requests and circumstances on the field that project has afterwards received some changes)

From that moment (until the official begging of work, opening the first Technology Fair in 1957), the first work on land development were carried out by Belgrade high-school students as part of youth work brigades, so that, according to the project of 89 engineers and technicians, they could be succeeded by 5 big constructional companies, among whom were Rad, Trudbenik and Tunelogradnja, and also 46 craft and specialized firms, with 2.500 workers and under the guidance of 180 engineers and technicians.

During the spring of 1957 Belgrade and the world witnessed the founding of an amazing and until then inconceivable constructional venture, in terms of both construction and ambient. Under the bright sky a city was formed with objects of amazing scales and performances. Still, while the works were still in progress, and scales were still on the objects, a decision was made that the “preview” fair warm-up begins on the 7th of June already in Hall 3, where the Energy and Electric power industry exhibition of Yugoslavia was opened. This exhibition was supposed to represent an organizational and technical exercise, preparation and check for the representative welcome of primarily foreign exhibitors and visitors, which came to be 2 months later.

Even before the conclusion of that phase of construction, in accordance with Milorad Pantovic’s idea, the Belgrade Fair had received some flattering recognition from foreign experts. Some of them were: “contemporary modern architectural solution”, “the urban complex solution is exceptional, and the idea as a whole is a complete success”, “most interesting objects of exhibition halls in Europe”, “the objects represent the high level reached by the Yugoslav builders”..

The construction of the second phase of the Belgrade Fair began in 1966 when the halls 7, 8 and 9 and the quay on the banks of Sava were built. The same year, newly built halls burned in a fire, and were rebuilt the following year, when the halls 10, 11 and 12 were finished.

Today, in its ninth decade of existence and work, the Belgrade Fair is a unique carrier of the exhibition industry in this part of Europe, and a member of the Global Association of the Exhibition Industry (UFI) since 1957.

The long tradition in management, business, innovations, global and local investments in economy, science, education, culture and sport, are a pledge of everything that the Belgrade Fair, under its glorious domes, will have to offer in the future.

The opening of the exhibition takes place on Monday the 8th of November, at 6pm, in the Gallery of science and technology SANU, Djure Jaksica 2.

The working hours of the gallery during the exhibition are: workdays from 10am to 8pm, Saturday from 10am to 3pm.

In accordance with the epidemiological situation there may be up to 15 people in the gallery space at the same time.