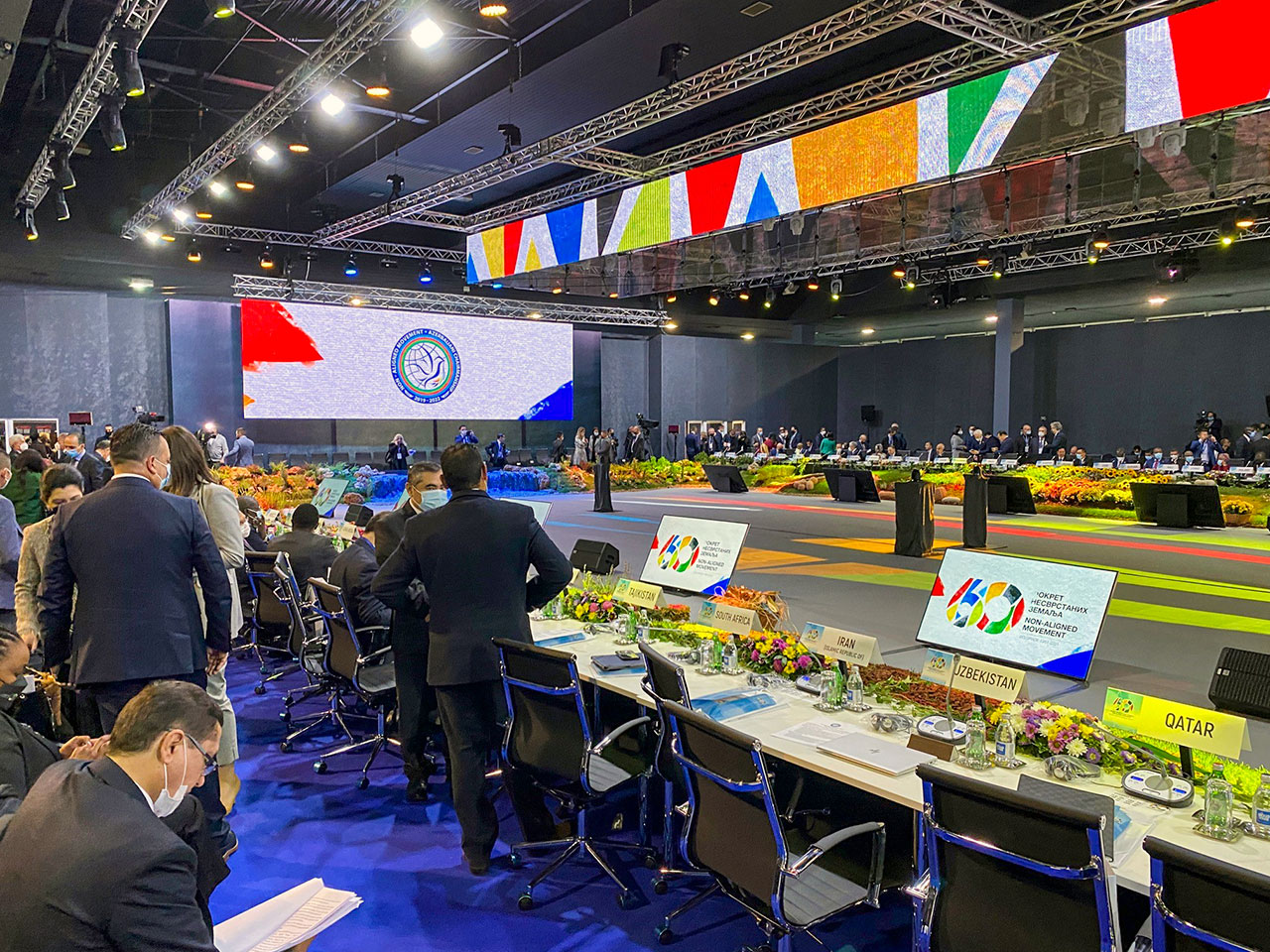 The Belgrade Fair is on Monday and Tuesday, the 11th and 12th of October 2021, the venue for the largest International Multilateral gathering in the world this year, second only to the General assembly of the United Nations. It is about the Non-Aligned Movement conference, regarding the celebration of six decades of existence of this global international movement, but also, primarily, its first conference held in Belgrade in September 1961.

The highest representatives of 120 countries members of the Non-Aligned Movement have been invited to come to Belgrade, as well as 17 observers. The participation of several Prime Ministers and Presidents was announced, as well as more than 100 high level delegations and about 40 Ministers of Foreign Affairs.

The current chairman of the General Assembly of the UN Abdulla Shahid, the Minister of Foreign Affairs of the Maldives, is expected to come. The General Secretary of the UN António Guterres and the President of Azerbaijan Ilham Aliyev, country which is the current representative of the Non-Aligned Movement, are expected to address the conference via a video-link.

The hosts of this imposing gathering are the President of the Republic of Serbia Aleksandar Vucic and the Minister of Foreign Affairs Nikola Selakovic.

In September 2011, honoring half a century of existence of the Non-Aligned Movement, Serbia was the host of a two-day gathering, as well. Then delegations from more than 100 countries were welcomed, with over 600 members. Among the participants were the official of the United Nations, Islamic Conference Organization, African Union, Arab League, and as observers, the representatives of Spain, Hungary and Finland. The Chairman of the Non-Aligned Movement then was Egypt.

The first conference of the Non-Aligned was at the level of country leaders or governments, and the creators of the idea are considered the Presidents of SFRJ Josip Broz Tito, Egypt (United Arab Republic, at that time) Gamal Abdel Nasser, Ghana Kwame Nkrumah, Indonesia Sukarno, and the first Prime Minister of India Jawaharlal Nehru. In 1961 in Belgrade came representatives from 25 countries which were members of the Non-Aligned Movement at that time, 3 countries as observers, and more Freedom Movements, Parties and Organizations.

5 years prior, the 19th of July 1956. Tito, Nehru and Nasser have on Brijuni signed a declaration of common cooperation and politics, which was the begging of the Non-Aligned Movement. 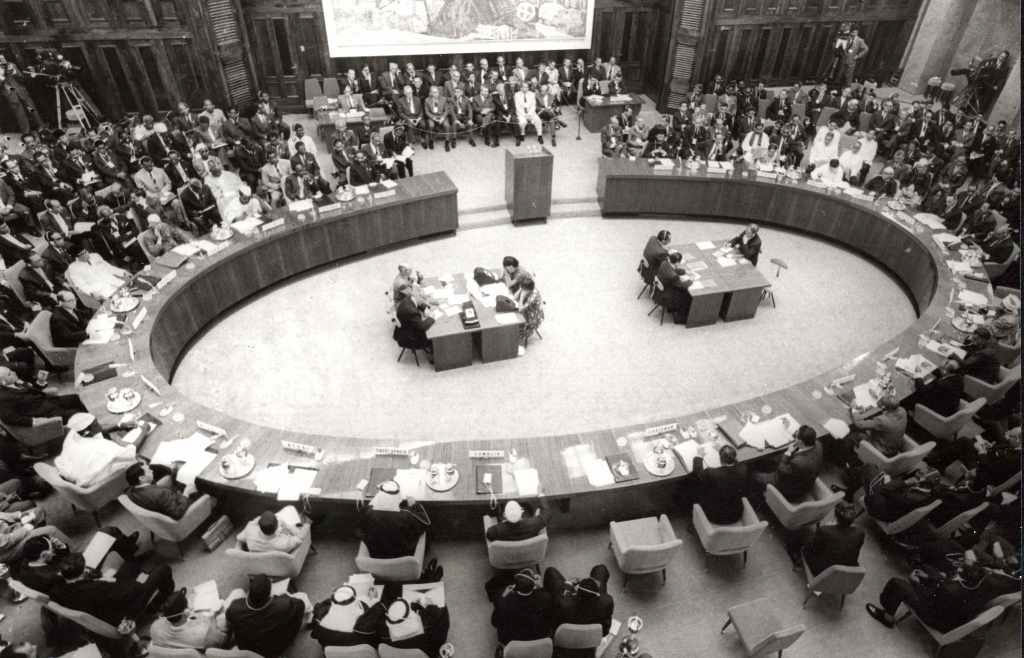 As part of the Non-Aligned Movement, which was primarily represented by 55% of the planets population, most world governments and almost two thirds of members of the UN, countries which weren’t officially members nor the opposition of one of the larger military-political blocs (NATO or the Warsaw pact) were gathered. The systematic idea of the organizations was to secure “national independence, sovereignty, territorial integrity and safety of Non-Aligned countries in their battle against imperialism, colonialism, neocolonialism, apartheid, racism, including Zionism and all other forms of foreign aggression, occupation, domination, interference and hegemony, as well as against bloc politics”.

The term itself “Non-Aligned” was used for the first time by the Indian Prime Minister Jawaharlal Nehru in 1954, using as reference the concept of the then Prime Minister of China Zhou Enlai, formulating the Five principles of peaceful existence, which will later be used as foundation for the Non-Aligned Movement: Mutual respect of territorial integrity and sovereignty, Mutual non-aggression, Mutual non-interference internal affairs, Equality and mutual benefit and Peaceful coexistence.

“More Important” members than other were considered to be SFRJ, India, Egypt and occasionally China. Brazil was never a permanent member of the Movement, but has shared most of the goals of the Movement and has sent observers to the conference meetings.

The Movement lost its credibility during the 70s when it was criticized, that it had dominant countries which were in an informal pact with one of the Great Powers.

A total of 18 conferences of the Non-Aligned Movement were held, the last one in Baku, Azerbaijan in October 2019.

SRJ has in 1992 withdrew from membership of the Non-Aligned Movement and became an observer. Serbia today is also considered and observer.

The first Non-Aligned Movement conference was held in Belgrade, from the 1st to the 6th of September 1961. Except for 25 legitimate members (11 from both Asia and Africa, plus the FNRJ, Cuba and Cyprus), 3 countries took part as observers. Participating Countries have then confirmed their attachment to the “criteria of non-alignment”, and with this committed themselves to leading non-alignment politics founded on the principals of coexistence, to support the battle for national liberation, to not include themselves in multilateral pacts of the bloc forces, to not make military pacts with the Great Powers and to not yield their territory for military bases of the Great Powers.

At the conference, several documents were adopted: the Declaration of Country Leaders or Governments, the Statement of dangers of war and world peace appeal, as well as the letters of similar content to the Prime Minister of the Soviet Union Khrushchev and the President of the United States Kennedy/

The historical significance of the Belgrade Conference is that it gathered statesmen of the Non-Aligned countries for the first time and formulated the founding principles and goals of politics and the Non-aligned Movement as independent, non-bloc and global factor in international affairs.